One of our previous posts discussed the increased use of sliding glass doors in office layouts.  It was noted that the use of glass as office fronts increases natural light and energy efficiency.  The increased use of glass however can contribute to decreased privacy.  One solution type that can bring the best of both worlds is Switchable Privacy Glass like the Dash Door PrivacyVue™ line.

This technology will switch the glass from transparent to an opaque translucent state with the simple flip of a switch, tap of an app, or wave of a hand.  The technology makes available a dynamic space that can be both private and open. 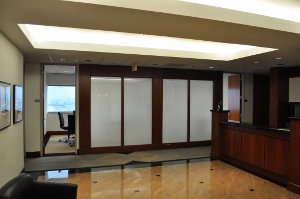 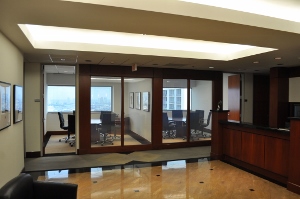 When the power is off the liquid crystal molecules are randomly oriented and will scatter incidental light. This renders the Switchable Privacy Glass panel opaque.

When an electric current is applied, the liquid crystal molecules line up, the incidental light passes through, and the privacy glass becomes clear.

Privacy Glass is a laminated glass. The laminated material within is Liquid Crystal Privacy Film, which responds to an electrical current.

PDLC (Polymer Dispersed Liquid Crystal) is a medium whose light scattering power is adjustable through applying an electric field. In their natural (uncharged) state, the PDLC droplets randomly align.

PDLC Film consists of a polymer matrix of liquid crystals enclosed by electrically conductive Indium Tin Oxide-coated PET film. The resulting PDLC Film has wiring attached to a conductive copper strip (busbar) along the film’s edge.  In a low voltage platform, this wiring is connected to a step-down transformer through which power is supplied for the “on” (clear) state.  In their natural (uncharged) state, the PDLC droplets randomly align, thus creating the an opaque translucent condition.

Two sheets of glass are laminated over the PDLC film. The components are assembled under high pressure and temperature to form a single unit.

The ordinary refractive index of these liquid crystals does not match that of the polymer, and the incident light is thus scattered, resulting in a translucent state. When an electric field is applied across the material, the PDLC droplets re-orient, and subsequently the extraordinary refractive index of the liquid crystal matches that of the polymer. Therefore, the incident light can pass through, resulting in a transparent state.